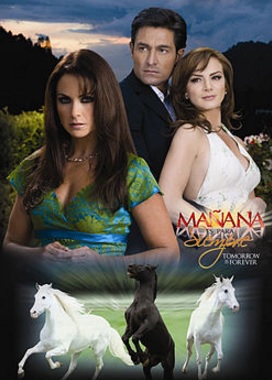 As you may have seen, I developed a bit of an addiction to Telenovelas. This was the first one I watched following the Maria trilogy, and I have to say that it was a nice surprise. The production values and other elements were quite a bit better, including a nice opening sequence.

The novela tells the story of the Elizalde family. Fernanda is about to get married, years after losing her childhood sweetheart following her stepmother catching them kissing. She had him sent away, and Fernanda eventually moved on, although she has always remembered Eduardo.

Her sister, Liliana, is locked away in a mental hospital following the death of their mother. Despite her initial pleas of innocence, everyone around her is convinced she actually committed the murder.

Both have had to deal with a stepmother they called “la hiena” (the hyena). She insists that she is just looking out for the best of the family, and has built a decent relationship with Fernanda. After showing the events of their childhood, the story moves forward to Fernanda’s graduation from college and her preperations for a wedding to Damian.

Here are some of my favorite bits….

It was really well-done, and the song was beautifully sung. That was the first hint that the production values had been upped since the Marias.

She was probably my favorite villain in a novela to date. She was evil, while still remaining fun. I loved some of her interactions with others, and really want to see her in something else.

Okay, so… I am not sure if a teen in the mid ’90s (where this sequence was set) would be jamming to this tune in her room, but I about lost in when “Girls Just Wanna Have Fun” played. It was such a fun scene, and the song makes another cool appearance later on.

As Maria La Del Barrio was my favorite of the Marias, I was very happy to see Thalia’s adopted daughter appear as Liliana Elizalde. The actress did a great job portraying Liliana’s desperation and madness, as well as her fear.

I loved how they used the game in this one. It was a bit heavy-handed at times, but I liked it all the same.

So, there you have it: five things I really enjoyed about this novela. Really, it was a lot of fun to watch, and it made me want to keep checking out this genre. Have you watched this one? What did you think? I’d love to hear about it. I’d also love to hear suggestions of your fave novelas. Until next time!